Why Am I Resisting?

We've all done it, whether we've wanted to or not... resisted what we want.

It seems crazy that we'd resist allowing something into our reality when we really want it, but that's what we do, and let's face it - it's frustrating!

We may also put that resistance down to fear, but is it really fear?

Play the video on the left 'Abraham Hicks - Why Am I Resisting? - to hear the full audio on this subject.

When you feel your power, it feels wonderful.

You're not afraid of empowerment. Fear pinches it off when you are not in vibrational alignment with the power.

It feels like you can't have what you want, because it's scary.

You may very well ask - why do I do that?

That negative emotion guidance is actually saying - you have been focused, and not just a little, pretty strong and steady on the absence of what you want, or something has stirred up your awareness of what you do want, and you're just maintaining your habitual vibration about it. So if, and it is if, that feeling of fear simply means you're vibrationally off from what you want, then what's the logical conclusion about what to do about it if you're thinking about the absence of what you want, what's the obvious thing to make the fear go away or to allow the fear to dissipate - don't focus on it.

But what if it's something you really want, and you feel like you can't stop thinking about it?

What might you do to hold the thought - I want to think about this without fear - I want to see this the way source sees it. I want to feel my way into complete alignment with it and that's when you go general.

Resistance is a sign that you are focusing on the absence of what you want. Change your focusNOW to what you DO want. #abrahamhicks #lawofattraction

Esther and Barbara and Mark and Richard they get on the airplane and they say , "We're not there. Why bother? We're not there. We'd like to go to Australia. It's far far away, but there's no point in trying to get there, because we're not there. Hello Leon, we can't come."

"Because we aren't there."

You think you don't deserve it because you don't have it, well you guess cuz you've never had it.

You've been practicing this grid which is giving you exactly how you feel, that's worth something.

We really want you to put this in terms of any journey - well here I am, where do you want to go?

Because I'm not anywhere else. I'm just here.

No, it makes me afraid.

It's just a habit of perceiving, and because you have not understood, your grid is always filling in. It's always changing, it's just changing to more of the same.

In the moment that you stopped noticing that you're not having it again something could change so how is it that you all get so hung up on offering your vibration, mostly by what you're observing . That's what makes you think that life is happening to you rather than that you are calling it to you.

So if your grid is filling in based upon what you've got going on right now, what could you do now that could change that? Something you could believe or feel yourself as the creator?

That's the easy answer isn't it but not so easy to do.

So, how can you alter your own perception?

"I've had improvement on many fronts in my life experience, there are many things that I wanted that I didn't have that eventually came about. I've not been void of well-being. In fact there's a lot of well-being in my life, and maybe because this is something that I want so much, and I've been focusing on it so much, not realizing that I was focusing on the absence of it, so I'm going to distract myself and not think about it so much, and when I do think about it I'm going to become as general as I can be."

Can you feel the power of that?

The grid filled in.

You weren't beating the drum of not having something that you want.

You weren't even thinking about it, you were tuned in, tapped in, turned on without even really doing it on purpose so you were up to speed with the contents of your vortex.

It means that you were up to speed with it, otherwise the idea wouldn't flow to you.

Whenever you feel negative emotion it always means your grid started to fill in with something you want and you blocked it with a belief (that you can change.) 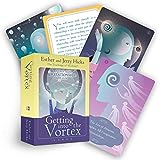